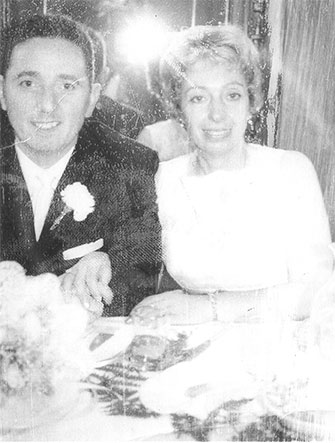 The American Hearing Research Foundation (AHRF), a 501(c)3 nonprofit organization celebrating its 60th anniversary this year, has renamed its annual otolaryngology residency grant program after the late Bernard (1915-2004) and Lottie (1916-2015) Drazin. The Foundation’s board of directors unanimously voted to approve the change at its May 2016 meeting. The change takes effect immediately and applies to residency grant proposals received for FY17 funding. Each year, the Foundation awards up to five (5) $1,000 grants to residents. The name change will expire in 2022 unless renewed by the Foundation’s board.

Mrs. Drazin’s nephew, Barry S. Brown, PhD, formerly with the National Institutes of Health and now a senior research scientist with the Friends Research Institute and an adjunct faculty member in the psychology department at the University of North Carolina at Wilmington, commented on the Foundation’s action by saying “I am delighted to learn of the Foundation’s plan to honor the contribution of my aunt, Lottie Drazin, and to recognize her heartfelt interest in furthering the work of understanding and treatment of hearing disorders. Lottie was a modest woman who would be overwhelmed by this compliment as indeed am I.”

Research grant submissions are accepted throughout the Spring and Summer and are due in August 2016. After submission, each grant receives a thorough review by the Foundation’s Research Committee in early Fall. Subsequently, the Board of Directors meets and approves funding for grants for the following year. Priority is given to investigators early in their careers who need seed funds to generate results and data that can be used to support applications for larger grants (i.e., NIH grants) in the future. The Foundation also occasionally awards grants specifically related to the study of Meniere’s disease. Meniere’s disease grants are supported through the fundraising efforts of AHRF partner, run because, and subsidized by the Foundation.

“The Foundation is delighted to honor the late Mr. and Mrs. Drazin for their generosity. The Foundation intends to aggressively market the newly renamed Bernard and Lottie Drazin Research Grant Program and looks forward to naming our first recipients in January 2017. The Drazin’s planned charitable giving will allow the Foundation to continue our investment into research related to hearing loss and balance disorders,” said Richard G. Muench, longtime Chairman of the Board of Directors.

The Foundation serves two vital roles: to fund significant research in hearing and balance disorders, and to help educate the public about hearing loss and balance disorders related to the inner ear. In addition to the residency grants awarded, AHRF funds five to 10 research projects per year, with an average grant being $20,000 or $40,000, and these projects cover a wide range of research areas and are conducted in the hope that the medical community may better understand how individuals lose hearing and balance functions, how they regain them, and, most importantly, how to preserve the hearing function individuals still have. Since 2010, the Foundation has funded over $1.1 million in research grants.